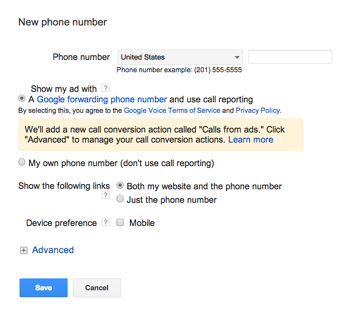 We recently came across a situation where we set-up call extensions for our client with a Google-forwarding number. However, in testing to make sure it was working, our call extension numbers were not showing up consistently.

We have a client that we recently launched. As part of the launch we set-up call extensions in Google AdWords. They were set-up at the campaign level and we enabled the Google Forwarding number to track conversions from ads.

The forwarding number allows Google to replace the client’s phone number in the ad extension of the ad with a Google provided number. When a searcher either performed a “Mobile Click-to-call” or saw our ad on a SERP and called it, we could see that conversion in AdWords. The call would be forwarded to the predetermined number that we had set-up in our call extension.

After double-checking that everything was set up properly, and doing more testing to verify this was actually happening, we reached out to Google to find out what was up with this.

It turns out that call extensions, even when set-up at the campaign level, are deployed at the ad group level, especially when it comes to forwarding numbers. Each ad group then has a threshold that they must meet before the call-forwarding number is deployed and substitutes the static number in your extension. I’ve been told that the threshold is between 20-50 clicks per month to start showing the forwarding number, and then “most likely” 10-20 clicks per month to maintain that threshold. (I put “most likely” in quotes as Google engineers don’t state that on record, but that seems to be the consensus from advertisers).

How to see if your ad groups are meeting that threshold

To check whether or not you are at that threshold, you can open up the ad extensions report, make sure the view is set to “call extensions” and then segment by “click-type.” Once the total clicks in that view are in that 20-50 range (per ad group) your forwarding number will start working.

Some important things to keep in mind:

What Picasso Taught Me About Marketing

Advice To College Students: How To Get A Job in Marketing